I have seen a long time ago on the Internet a picture of a, admittedly somewhat crazy recumbent trike. I immediately liked the wheel and with a little research I found the possibility to borrow such a bike for the weekend.

No sooner said than done. I rode many of my usual routes that weekend, including the exposed ones through the woods. Everything worked out wonderfully and I enjoyed the weekend so much that the desire to buy such a bike became bigger and bigger.

So I started saving and then bought this bike in 2015. Condition was that I then make all trips under 10km with this bike and thus replace the car.

I still have a car, but I have kept my condition.

With the simplest means I have begun to create my first self-made films. After cutting together simply times published on the Internet.

In the foreground is the tour, the ride and nature.

But the cutting is fun for me!

It gives me the opportunity to express myself very subtly, quietly and reservedly. To play with images and sequences, to convey aha experiences and to awaken memories.

That has only developed over time. The films from 2015 still show how uncertain I was on the road at the time. Only later did I find the courage to take the viewer along with wild cuts and time jumps.

So it became clear that I was developing my own style. To express myself clearly and also to stand out from the crowd.

I cut the films differently:

Like documentaries, mainly - if feasible - chronologically. Of course, I want to convey the tour, and it happens in a fixed chronological order.

The stories in between, however, I tell in a completely different way: not chronologically, at a different speed and with images and sequences that match the music and in dynamic cuts.

In another concept, I tell sagas and legends from the foothills of the "swabian Alb" - wrapped up in a tour to the presumed location of the event.

Sometimes this comes across as bombastic, sometimes very quiet - and at first glance it doesn't fit the theme at all. Many of the small effects only reveal themselves on closer inspection, when you think you know the film almost by heart.

I filmed the earlier films mainly handheld with the simplest equipment. Later I added smaller cameras, fixed but with changing perspectives. Everything was shot in FullHD with 50fps.

When a heavy downpour flooded most of my equipment, I switched to 4K and 60fps.

Today I shoot parallel with fixed cameras and stabilized handheld. I use only original sound directly from the raw data, in places later underlaid with commentary or narration. There is also little post-processing of the video data - either the shot sits perfectly right away, or it is not used. Only in emergencies do I use filters or cinematic post-processing. 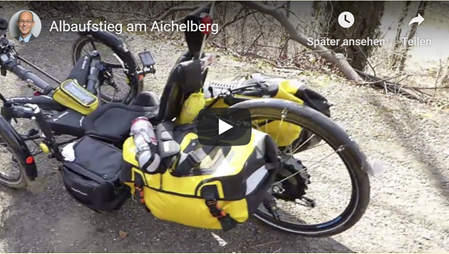 My first films I have created with the simplest means, cut together and simply published on the Internet. That was in 2015, since then I have constantly developed and changed. You can see this development well if you compare films from different years.

All films are sorted by their release date and not by the date they were shot. Editing the films sometimes takes a lot of time. Therefore...

Sometimes movies are shown only with a gray, not working link. Their release date is in the future. So the movie can be seen at a later time.

The only thing that helps is to check back often, or to get an access authorization. I publish according to schedule on Sunday mornings at 9 o'clock.

One more thing: A Youtube subscription costs nothing! But it helps me to see how the film is received by the audience, what they like and what the comments are. It helps me to get in touch with the viewers.

So a subscription has advantages not only for you, but also for me - and besides, I'm very happy about it.